At the time of her death, Sister Marge was 84 years of age and in her 67th year of Religious Life. Sister Marge earned a Bachelor of Arts Degree in Education from Diocesan Sisters College, 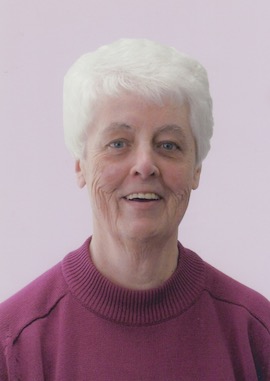 West Hartford, CT, a Masters Degree in Mathematics from Villanova University, Villanova, PA., and a Sixth Year Certificate in Administration/Curriculum from the University of Connecticut.

Always interested in peace and justice efforts and the welfare of the poor and disadvantaged, Sister Marge transferred her energies to prison ministry. For 12 years, she assumed the role of principal in the educational system at various Connecticut Department of Corrections Institutes. Sister Marge's concern for the inmates' success in acquiring and enlarging upon varying levels of education expanded her prison initiatives.

She began to offer times of spiritual enrichment in the form of prayer groups and retreats. Sister Marge became a steadfast member of the Connecticut Network to Abolish the Death Penalty (CNADP), working incessantly until the court abolished the Death Penalty.

She was an active member of the Peace and Justice Commission in Bridgeport, CT, and the HIV/AIDS Committee, Hartford, CT. During this time, she also worked at Gray Lodge Shelter for Women in Hartford.

Following a brief time as principal of Cedar Court School in West Hartford, CT, a sponsored work of the Sisters of St. Joseph, Sister Marge spent two years as executive director of Tabor House in Hartford, CT, a homelike setting for men and women living with HIV/AIDS.

Education always close to her heart, Sister Marge spent the last five years of active ministry at Covenant Prep School, Hartford, CT, a private rigorous setting for young men. There, she was the librarian, a teacher, and a mentor to teachers and students.

An avid knitter, Sister Marge was well-known for her beautiful Irish sweaters, afghans, and bedspreads. Her hands were never idle. She completed many pieces during Sisters' community meetings, never missing a stitch as she concentrated and actively engaged with the conversations at hand.

Sister was also a faithful letter-writer, remembering her many friends and family members during holidays, birthdays, and other special occasions. All who knew Sister Marge never forgot her, and she never forgot them. When ministry came to an end, Sister Marge remained actively engaged in a 'new retirement' ministry. She became a designated visitor to St. Lucian Residential Care Home in New Britain, CT, where many of her religious sisters lived. Rain or shine, every Saturday found her visiting.
Due to her physical challenges, Sister Marge moved to Monsignor Bojnowski Manor in New Britain, CT.

The Sisters of St. Joseph thank the Daughters of Mary Immaculate and the excellent staff at the Manor for their welcoming spirit and sensitivity to Sister Marge and for the compassionate care given to Sister in declining health. Her Sisters in Community, her family, and friends will remember Sister Marge for her openness, her wit, and kindness of heart.
In addition to her Religious Sisters, Sister Marge is survived by her brothers and sisters-in-law, Robert Vincent and Claire Fish of Avon; Edward Joseph Fish of Virginia; and Francis Stephen and Julia Fish of New York, as well as many nephews and nieces. Along with her parents, she was pre-deceased by her sister-in-law in Virginia, Loretta Fish.
A graveside service and burial took place June 24, 2021, at the Sisters of St. Joseph Cemetery at the Provincial House, 27 Park Road, West Hartford, CT.