“Encouraging Service to Those in Need in 17 Countries” 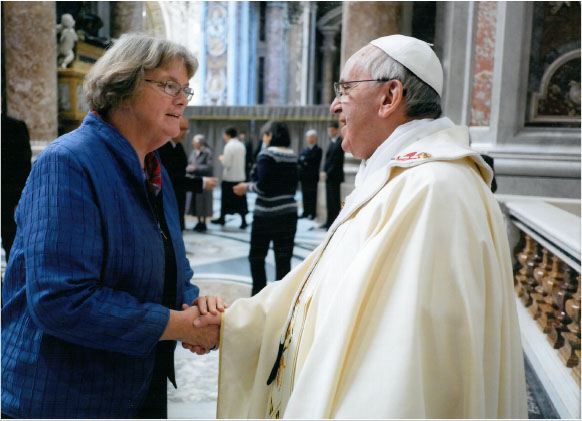 Sr. Sally Hodgdon currently serves as the General Superior, or President, of the Sister of St. Joseph of Chambéry’s (CSJ) international congregation, and lives at the CSJ General House in Rome, Italy. This is her 12th year in this sacred ministry, in which she works with a team of three other leaders from India, Brazil and Italy. They guide, animate and collaborate with about 1,200 other sisters who are missioned in 17 countries within North and South America, Africa, Asia and Europe.

“Our congregation’s mission is to be a healing presence while living our charism of communion, that is to bring about the union of ourselves with God, all others with God and others with each person they meet,” Sr. Sally said. “We, as the General Council or General Team, try to support and animate communion, challenging our leaders and sisters in these various countries to continual growth and to witness to this communion as they reach out to serve those who are most in need.”

During her first 10 years in this ministry, Sr. Sally would travel annually to about seven to 10 countries, visiting sisters and their exceptional ministries, many which serve the very poor or marginalized. In 2020, with the unwelcomed arrival of the Covid-19 global pandemic, this drastically changed. She only traveled to Ireland in February and to the United States in August. Since the team could not travel, they became more proficient in hosting virtual meetings with the congregation’s leaders, with large and small groups of sisters from various countries, and with leaders of other religious congregations and lay non-profit groups.

As an example, Sr. Sally was scheduled to spend three weeks in Southern Brazil in June with a member of the team, visiting three local houses during the course of each day, and having meetings with a larger group of sisters for two days.

Instead, from their conference room in Rome, over the course of three weeks, they met virtually with about 100 sisters living in 30 local communities, “visiting” two or three houses a day, from 2:30 to 9 pm Rome time.

“I really missed being in person with our sisters for longer and relaxed periods of time, listening to their stories, sharing their faith experiences, visiting their ministries and meeting the local people,” Sister Sally said. “But it was still wonderful to be able to ‘be with’ them in a new way even with the limitations of Zoom. The sense of communion and being ONE with them was still very much present.”

Sr. Sally is pictured here with Pope Francis in 2016, with whom she met when she served as Vice President of the Union of International Superiors General (2013-2019).