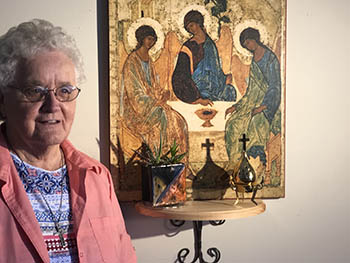 “The question we should be considering is not ‘Why did this happen to me or someone else,’ but ‘Where is God in this?’” asks Sister Jean, who answers: “God is in all things.”

Take the horrific incidents of school shootings, for example. “Evil is not ‘of God,’” Sister Jean says. “God is the force that makes schools become safer places.”

For the past 40 years, Sister Jean has helped both lay people and vowed women religious, and men pray, serving as their guide to help them discover when and where God is present, not only in immediate situations, but in their everyday life.

Leading Sisters and lay people in one-on-one sessions and in groups, she helps them mine their most personal spiritual connection with God and leads them toward exploring that relationship as deeply as their spirit will take them.

For Sister Jean, prayer has been the core tenet of her life since high school - the all-girls Sacred Heart Academy in Stamford - where she transferred as a sophomore after her parents moved the family to Connecticut. The school, now closed, was founded, administrated and staffed by the Sisters of St. Joseph of Chambéry, joined by talented lay educators along the way.

Sister Jean was influenced by two religion teachers who would propel her on a life of service to God: Sister Francis Dolores Valerio and Sister Mary Imelda Keenan.

“They were very inspiring,” she said of the two sisters, who expanded her understanding of prayer as relationship. “They could communicate the person of Jesus through teachings on his mission and ministry.”

Not only did she learn to pray more deeply at Sacred Heart, but she began to warm to the idea of a possible call to religious life.  In her junior year, that desire became a strong, persistent nudge. By then she was talking to her parents about joining the community.

“My father didn’t want me to enter. He thought I was too young” to make that important life decision, she said. Her parents couldn’t see how she would adjust to life in a convent, being involved in equestrian events and so active as a track and basketball athlete. She also verbalized her vision of her adult life as owner of a horse ranch in Colorado where she would raise her family.

But that vision faded as she listened to her heart. “I felt I was called,” she said.

Shortly after reaching the age of 18, Sister Jean entered the convent and devoted her life to serving needs identified by the Sisters of St. Joseph.

She knew she made the right choice and eventually her parents saw it that way. In her 67 years as a Sister of St. Joseph of Chambéry, Sister Jean has served in many capacities in as many locations. As a teacher for 18 years, she served in seven schools in Connecticut, including her alma mater.

She also served as part of leadership of the community of the Sisters of St. Joseph of Chambéry, a position known as the provincial, for six years, and she represented the larger international congregation for another six years in Rome, as its general councilor.

She has visited more than a dozen countries and spent 17 years in California.

It was while serving for about five years as director of Initial Formation, which helps novices become accustomed to religious life, that she felt called to go deeper into the ministry of spiritual direction.

After persistent requests to take a course that would plunge her deep into the theology and spirituality of Jesuit prayer, the community sent her to a three-year training program offered at (what at one time was known as) the Weston (Jesuit) School of Theology in Cambridge, Mass.

She used that immersive education as a springboard to counseling individuals and groups, internationally in such places as India and France, as well as in California and now Connecticut. In her guidance, Sister Jean helps participants explore their relationship with God through prayer. She guides them in the teachings based on the Spiritual Exercises of St. Ignatius of Loyola, who founded the Society of Jesus (the Jesuit order), and is the originator of what is now called Ignatian Spirituality.

(The Sisters of St. Joseph of Chambéry were founded by a Jesuit priest, Jean Pierre Medaille, SJ, in 1650.)

“I believe every human experience we have has the potential to have a religious dimension to it,” says Sister Jean. “Ignatius Loyola said ‘God is in all things.’”

She shares this information with those she counsels one-on-one and in group retreats. She leads directed retreats to groups of six, usually over a period of 8 to 10 days, needing the time to explore the elements of Ignatian Spiritual Exercises and time to guide participants one-on-one.

Sisters Jean helps participants find the difference between reciting a prayer and the deeper relationship with God that comes from contemplating a prayer, going beyond the words and meditating or reflecting on their meaning.

“I spend most of my time talking to people about God,” Sisters Jean says. “It doesn’t get better than when you talk about God.”

In all her work, she consistently conveys the good things that God offers us.

“Our deepest desires are what God desires for us,” says Sister Jean. “And God always desires good things.”